Tech Tip: Ring Around the Bullseye

A recent post on windshield-repair-forum.com brought to my attention that even some experienced windshield repair technicians are very confused about the cause of the ring around the outside of a bullseye, which is sometimes visible after the completion of a windshield repair. It’s time to separate the facts from the fallacy.

To be fair, there are several possible causes for a ring around a bullseye, and understanding the cause is the key to identifying what you are seeing. In this three part series, we will explore the primary causes.

A pressure ring is translucent; it has no color, and has a bit of a watery look to it.  What you see is the resin trapped between the glass and the Polyvinyl Butyral (PVB). Causes include:

If the resin is forced into the damage under excessive pressure, it can separate the PVB laminating material from the glass.

A combination of heat, pressure, old glass and old damage. 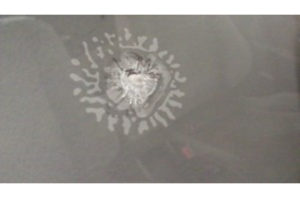 Delamination around an existing rock chip indicating an old windshield and old damage.  Proceed with caution after advising the customer!

This concludes part one of our three part Ring Around the Bullseye series. In part two we will examine trapped air.