Get the latest videos on tips, tools and techniques for the professional windshield repair technician. 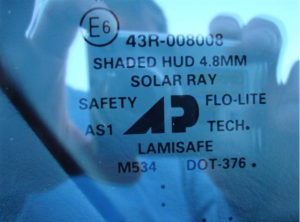 Head-up display (HUD) was originally developed by the military to transmit targeting information to pilots without forcing them to take their eyes away from their path. HUD systems, a classification extending to any transparent display that presents data without requiring the user to look away from the usual field of view, have evolved beyond the bulky in-console navigation units from only a few years ago. Today, head-up display systems for the auto market are being introduced that project speed, compass direction, warning messages, radio information and soon even Yelp reviews right on the windshield. What once was found only in luxury vehicles, HUD displays are a rapidly growing centerpiece in most automotive designs.

Automakers encourage car owners with HUD windshields to replace them with original equipment (OE) when necessary. The windshield is specially designed to correctly project the HUD image. Installing anything other than an OE replacement windshield may result in the HUD appearing as a double image according to automakers.

While a vehicle with this technology hasn’t made it into our shop, with the increase in popularity, we know it’s only a matter of time before one does. Delta Kits President Brent Deines shares his approach to completing repairs on this type of windshield, “Delta Kits always recommends following manufacturers recommendations for specialty windshields,” said Deines. “However it should be noted that there are now many aftermarket HUD devices and phone apps that do not require a special windshield or coating so only vehicles with factory installed HUD displays that require specialty windshields are cause for concern.”

Before starting a repair, it’s important to check the identification markings on a windshield often called the “Bug”. In most cases the Bug will provide a wealth of information about the glass manufacturer, the American Standard “AS” number, the DOT number, the M number and if there is HUD technology. The bug can be found in the bottom center
passenger side of the windshield.